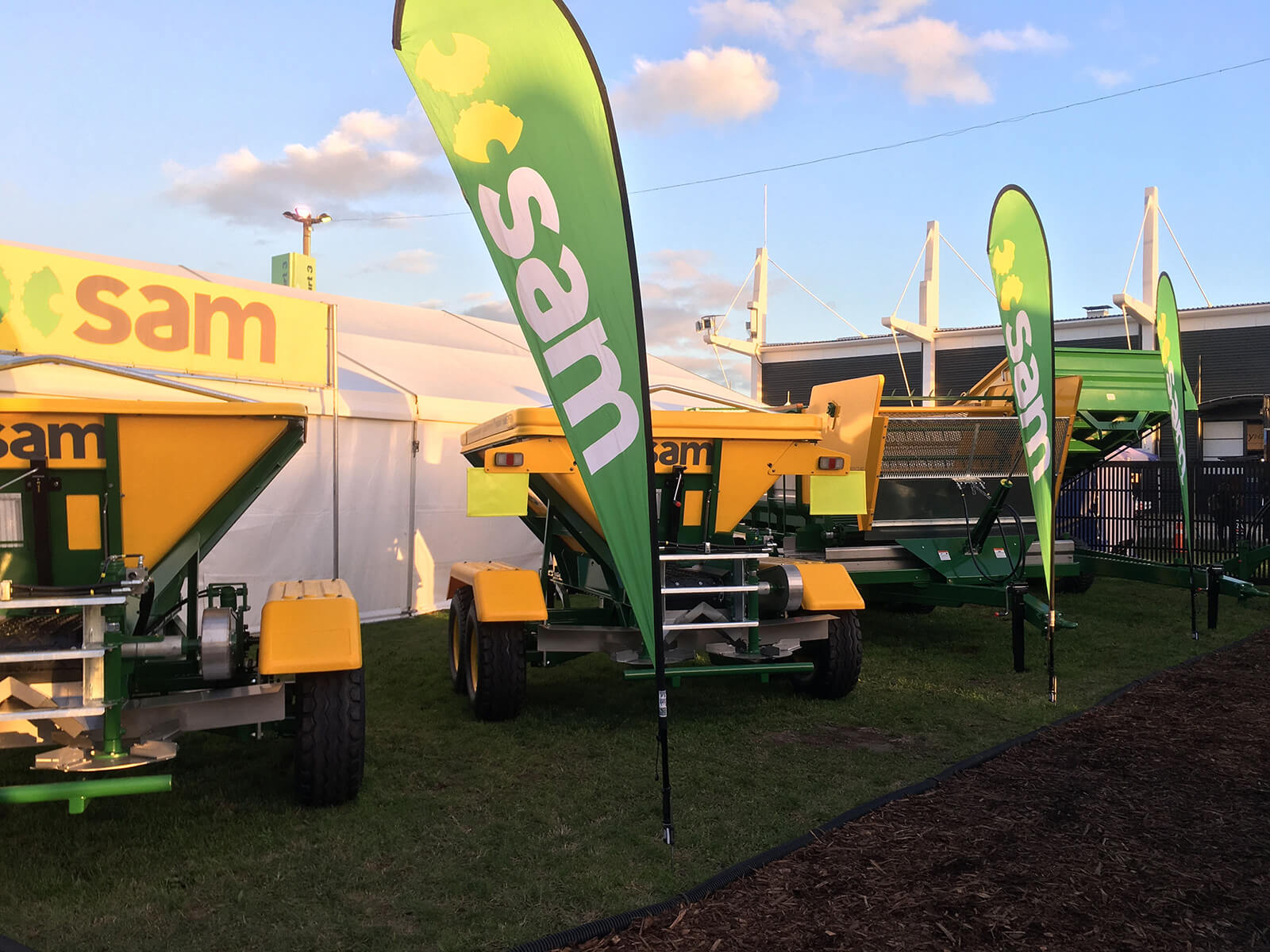 Jaiden Drought checks out a machine that can handle one of the most corrosive work environments on the farm and still come up good year after year.

Many things are considered farming institutions in New Zealand - including our ability to fix anything with either baling twine or No.8 wire, black singlets, Toyota Hilux’s and Red Bands (now also available in jandle and work boot form). This also crosses over into the machinery world with SAM Spreaders being right up there. Having been in the business of making fertiliser spreaders for 35 years, Coombridge & Alexander first launched the SAM spreader in plain red, then switched to the more familiar green and yellow in 1995. In 2005, the plastic hopper version in the same livery, took over from the traditional steel bin.

Coombridge and Alexander, nestled in the heart of the Waikato, has been in the manufacturing business since 1940. It started out making posts but switched to farm machinery in 1946 and hasn’t looked back. The company also offers a wide range of tip trailers and feed out wagons and, given Kiwi farmers reputation for ‘looking after’ equipment and the corrosive nature of fertiliser spreading, it is a testament to its engineering that an evolution of the 80’s vintage machines are still in operation.

The test machine is a 2015 six-tonne 400mm belt spreader with swivel coupling, 400/60-15.5 tyres (both standard on six-tonne machines). Optional extras include remote greasing, road lighting and roll top cover. Load cells or the optional fully hydraulic set up and an 800mm-wide belt for organic material are other available options.

I can tell you that the spec of our test machine means it’s possibly not the most accurate spreader on the market, but having said that, this is not an inaccurate spreader either and to be fair SAM offers a very accurate option with fully hydraulic drive through a Whitehead computer controller and section control capabilities. But the slightly more accurate linkage mounted machines have one major downfall - capacity, and that is where the trailing SAM spreader will eat it up in terms of hectares.

There is a fair bit of science behind their accuracy - the term which is used to measure spread patterns is the coefficient of variation (CV), a measure of the percentage of fertiliser outside a perfect spread - zero percent being a perfect spread pattern. SAM spreaders have achieved a 7.1% percent for Urea and 8.1% for Superphosphate which is well inside the New Zealand standards where anything under 15% is acceptable for nitrogen-based fertilisers such as Urea, DAP, nitrophoska etc.

Set up and spreading

The machine simply runs two hoses from the tractor; red is pressure while yellow is return, allowing the 35L/min minimum oil flow to be delivered to the twin 600mm spreading discs to ensure they spin at the desired 850rpm.

To set the  desired rates there is a spreading chart at the back of the spreader while a more comprehensive manual is supplied in the book. You can work out the density of the fertiliser you are spreading if it is a specific blend and match up the spreading rate in the book to have the most accurate results from the back door jack setting. This is relatively fool-proof although there is an element of practise and minor adjustments for the first load to get it spot on as each fertiliser will flow slightly differently.

The floor belt speed is ground-driven via the encased chain drive from the belt to the large drive sprocket which is then held onto the smaller drive sprocket mounted on the pivot of the walking beam assembly. This means the application rate which you have the back door set at will remain constant regardless of contour or tractor speed.

Below are the capacities for the test machine although four, five, eight and nine tonne machines are also available with various options and tyre sizes available.

You don’t need me to tell you that fertiliser is corrosive. If these machines weren’t built to last the 80s, machines simply wouldn’t be here. Having said that, the move to the plastic bin in 2005 was definitely a smart move meaning these should last longer than the steel predecessor. Although, not all components can be plastic, so to hold the structural integrity together means the chassis is firstly sandblasted, then thermal-arc spray galvanised, primed, followed by a final two-pot epoxy top-coat. These machines are also constantly evolving. This machine is different to the 2005 model with more stainless steel in high corrosion areas being used to try and keep the machine in good working condition for many years in the most corrosive conditions a farm machine would face.

Again, the door setting sticker and book chart show the spreading rate at certain centres. It is easier to spread at closer centres (the centre of the tracks up and down the paddock) as you can see where you have been and judge the distance more accurately (if not using GPS). Spreading at 15-metre centres for most fertiliser such as super and urea is more likely to be the perfect balance between accuracy and covering the ground while 10 metre centres is better for fine products like Lime or heavy application rates which improves accuracy and places less stress on the spreading discs. The reason for this is you have to increase the rate proportional to the width you are spreading to get the desired application rate. The higher the rate, the more product is hitting the discs at once, therefore the more strain they are under.

The key for any investment in your business is to weigh up the options and decide what is best for your situation. Yes there are slightly more accurate machines on the market but would the extra four-six tonne capacity suit you more? For many, the answer will be yes. Given SAM’s reputation is built on 35 years of building quality machines that have stood the test of time, it really is a testament to these Kiwi icons and should leave you in no doubt that you’ve purchased a solid product.